“...another great project! The lyrics highlight Tommy’s songwriting expertise. Kathy’s sweet harmonies are icing on the cake!......incredible music that reaches me deep into my soul...”
– J. Fisher, WGCS, IN

“...feel-good album punctuated by beautiful music, lyrics and harmonies that put a smile on your face. It just may be their best....”
–  A. Martello, WIOX, NY

“…from toe tappers to driving grooves to mellow heartstring ballads…Two thumbs up on another stellar project!”
– T. Tranchilla, KPFT, TX

“…songs from the heart with a sense of warmth and positivity so badly needed for these times. ‘Philosophical folk’ ... sung beautifully in support of their sweet songs that deserve it.”
– R. Evans, KOOP, TX

Byrd & Street’s newest folk-Americana album, Love Circles ‘Round, a collection of songs with a definite philosophical theme features their impeccable male/female harmony and some of Austin’s finest musicians. “…instrument and vocal recordings are life-like and natural…smooth solo vocals are just as brilliant as ever and the harmonies are pitch perfect.”
—T. Tranchilla, KPFT

This Much is True

"Hooked from the first song...can listen over and over and never tire...amaze me with their melodies, vocals, and instrumentation."
- Jon Stein, WTBQ

" ...easy and comfortable like a spring afternoon in Texas with a message of hope and reflection." - Roger Allen, Host, KGSR, Austin

The Austin-based duo of Byrd & Street seem on a mission to prove that you don’t need more sounds, more instruments or more electricity to deliver a solid album of songs. And with this ‘less is more’ mentality, Byrd & Street came out of the studio with another terrific collection of songs on ‘Words And Music.’ The new CD opens with what would turn out to be one of my favorite songs, ‘I’m Gonna Swim’. From the outset, Byrd & Street’s strengths show with strong, thoughtful lyrics and effortless harmonies, intertwining with terrific playing.

‘When I Hear Her Sing’ is so sweet and beautiful. I was thinking this song was describing a woman’s physical beauty, and then it caught me by surprise (one of the fun things about listening to a song before noting the title). Here’s what I mean:

‘I Need A Small Town’ is another of many highlights on ‘Words And  Music’.

I love ‘Old Out Of Tune Guitar’. To me, this song touches on a love for music that so many people have in them, but few have truly tapped. “You’ll never hear the songs he plays / Just an old broken down guitar / You can only hear his music / With your heart”

From the opening track, I just feel good about where ‘Words And Music’ takes me. It took me to the mid-70′s, when I would not just listen to – but study – Jim Croce albums with an unhealthy obsession. Byrd & Street’s ‘Words And Music’ is a CD that can be listened to several times, and each time, you can find something new and cool about it.

Tommy Byrd and Kathy Street have been collaborating since 2001. From the open of ‘Words And Music’, it becomes evident that these two voices belong together. Their harmonies are the highlight of this album, but by no means the only reason that ‘Words And Music’ is a joy to listen to. This music breathes confidently. 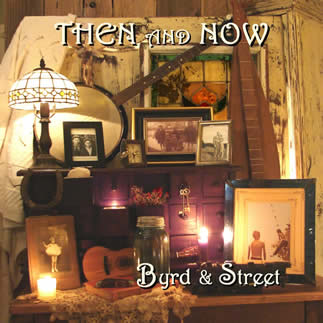 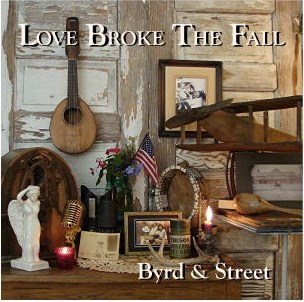 "I love A Different Plan...He Tells All the Girls He's A Cowboy should be picked up by George Strait...the harmony here is awesome"

Stories of Life, Songs of Love 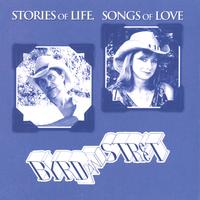 "I wake up every morning to that same old bump and grind./Chasing a dollar, falling in line/ Over my head, underpaid and overdue/ I've got one thing on my side, Baby, Baby that's you./ Lost in the shuffle, but I'm still in the race/ Backed in a corner, but I know this ain't my place." Byrd and Street from "Baby That's You"

The title of Austin, Texas, duo Byrd and Street's latest release, Stories Of Life, Songs Of Love, is a fitting one.  With an album of original music touching life and love, all done in a bluesy, Americana vein, Tommy Byrd and Kathy Street share an appealing formula on their self-released album.  The duo, who formed in 2001, recently won a local Performer of the Year award.  Now they prove their mettle and versatility here with fine harmonies, crafted songs, and seasoned experience.

Smooth tones, a relaxed style and no fuss vocals— that's Tommy Byrd.  Listen closely.   He's a little like Lyle Lovett.  It made their publicist, Marilyn von Steiger (Stop the Truck and Bob Dildy), laugh when I told her that, but she didn't disagree).  I mean, to these weathered ears, he does!  Having shared stage space with the Geezenslaws and Willie Nelson and inspired by the Beatles, Byrd bought his first guitar in '64.  He's been kicking around in bands since.  Now this prolific writer has found form in his band mate, Kathy Street.

Kathy Street is a singer, actor (she's starred in local productions including.  The Sound of Music and My Fair Lady) and songwriter.  She, too, is no stranger to bright lights and rowdy crowds, as her musical career began in 1967.  With a voice helping them win the 2002 Austin Songwriter's Group annual contest, Street comes armed with a soulful and energized voice.

The album opens with "Baby That's You," an appealing musical entree to the 12 offered tracks. Sprinklings of accordion and fiddle prop the tale of daily rituals, survived only with a partner's love, while confirming shades of Lovett appear in the lyrics of love's better qualities, "Ain't It Funny."  Move to "The Melody Of You" and "Lonesome Without You," and the mood hits. These guys are love merchants.  They share their passion for words and performance with a charm that spells Austin, but with a message that'll travel to reach a willing heart.

While Byrd and Street weave their magic, a tight band of fiddles, mandolin, accordion, piano, guitars, drums and bass makes stable harmony.  The musicianship here is top drawer Texas.  When the band strikes up with hard bass slaps, fiddle, and brushed drums on "Rock Away The Blues" or the guitar-led, drum-driven, funky tale of desperate romance on "Hard Time," you know this is no dress rehearsal.

The successful spirit of this album is simple.  Tommy Byrd writes a good tune.  There's no struggle to make or force a story line; Byrd just lets it flow.  Kathy Street, mellow and warm, plays her part, too.  It's a blend that shines on the easily understood tale of first kisses on a front porch, kids in their Sunday best, angry words forgiven and hands held tight, as heard on "Just An Old House".

A good part of writing for CountryReview.com is the chance I have to hear original music.  Sure, some of it falls flat, but some, well, it makes you say, simply, "Yes !"  Beyond the crowds, trendy CMT, and the fickle followers of fashionable cowboys, is the rich world of independent music.  A place where real music, not just CD sales, drives the deal, a place where music arrives shaped from skill and passion.  Check out Byrd and Street.  Their stories of life and songs of love prove my point.